Jump to Latest
urban legend
Hunting from the ground is one of the most common ways to hunt with a crossbow. What better way to conceal yourself on the ground then to hunt from a ground blind? Many hunters that hunt from ground blinds will use some sort of shooting aid to help steady their crossbows. There are many to choose from, each having advantages and disadvantages over the other. Let’s take a look at some of the options you can use to help support your crossbow while hunting from a ground blind. For the most part, there are three primary supports you can use while hunting on the ground. In this article, we’ll take a look at monopods, bipods, and tripods. As stated before they each have pros and cons, especially when hunting in the confined space of a ground blind.
The monopod is most likely one of the most popular ways to support your crossbow while in a blind. They are light to carry in and out of the woods, and are very easy to move to any location within your ground blind. This can be a valuable feature if you have game that can come from any direction, offering shots through multiple windows. Because there is only one leg to the monopod to worry about, space does not become a factor in most cases. Even better, some monopods can be mounted directly to the bow itself. However, a monopod is also the least stable of all the supports. If you are a crossbow hunter that only requires a small amount of support to steady your aim, a monopod may be just the answer for you. But if you are a hunter that cannot hold steady, sometimes the monopod just does not provide a stable enough platform in which to rest your crossbow.
The bipod is the next in line when discussing crossbow shooting supports. With two legs, the bipod provides a more stable platform, eliminating much of the lateral movement of your crossbow while still being relatively lightweight. Just like the monopod, many bipod systems can also be mounted to your crossbow. They can be easily moved around a ground blind but do need a little more space because of their wider footprint. It can be harder to get close to the corners of a ground blind to shoot when using a bipod. One nice feature is that most bipods are easily adjustable in height by simply moving the legs closer together or further apart. Many times this can be done with one hand resulting in very little movement.
The tripod is the most stable ground blind shooting support for a crossbow. They are also the heaviest and most cumbersome. If you are a hunter that requires the most support for your bow the tripod is the way to go. Many tripods will even hold the crossbow for you in the ready position. This can be a great feature especially when hunting with a child, taking away most all movement and any strength needed to steady the crossbow. A tripod will take up the most room though. In some of the smaller ground blinds, they can make for tight quarters. A tripod is great to way to support a crossbow if you know exactly where your shot will be. Such as when hunting over bait. But in the event you need to move to shoot through a different window, the tripod can be a chore to move. Often times the legs will need to be readjusted every time you move it. This can cause extra noise and movement in the blind, and eat up valuable time. We all know that shot opportunities do not present themselves for very long.
Whichever method you decide to use to support your crossbow will most likely be based on what type of animal your are hunting, how far your shot will be, and how steady you can hold without a support. Many times when whitetail hunting, I don’t even use a support when I know my shots will most likely be under thirty yards or so. However if I was sitting on a watering hole for antelope where I may need to stretch the shot out a little further, a support of some kind could make the difference of a clean kill or a missed opportunity.
Chances are are if you are a gun hunter, you already own one or two of these shooting supports. If you don’t, there’s a good bet one of your hunting buddies do. Before heading out to the woods this fall, grab the supports you can get your hands on and practice with them in your ground blind. Try moving around, shooting through the different windows. Practice close and far shots, along with shots at different angles. It won’t take you long before you decide what support is best for you. Finding out you brought the wrong one is not what you want to do in the woods when you need it the most. At the very least, you’ll be more confident knowing what shots you can comfortably make with your shooting support of choice. Plus you’ll get to spend some extra time practicing with your crossbow which is always a good thing.

urban legend
Hi and welcome to Crossbow Nation!!!. I started this site so all of us crossbow enthusiast could have a place to hang out, get to know each other, and share some information. This site has been ever evolving since I launched it and I'm sure it will continue to change. If you have any suggestions or questions, feel free to email me at [email protected] anytime.<br /> Thanks, Jeff
Follow View All Authors

Written By:
urban legend
Hi and welcome to Crossbow Nation!!!. I started this site so all of us crossbow enthusiast could have a place to hang out, get to know each other, and share some information. This site has been ever evolving since I launched it and I'm sure it will continue to change. If you have any suggestions or questions, feel free to email me at [email protected] anytime.<br /> Thanks, Jeff
Follow View All Authors
7 Replies
O

Joined 5 mo ago
·
17 Posts
I like my cheapo monopod. Use it in gun season too. I also bought some rails that fit on the "V" portion of my hub blinds. they just rest on the rods, have a padded section to set the weapon on.
O

Nick6053 said:
I like my cheapo monopod. Use it in gun season too. I also bought some rails that fit on the "V" portion of my hub blinds. they just rest on the rods, have a padded section to set the weapon on.
Click to expand...

Nick,
That sounds really good. Thrifty and functional.
Any chance of you posting a pic or 2?

Oldtoad said:
Nick,
That sounds really good. Thrifty and functional.
Any chance of you posting a pic or 2?
Click to expand...

I Can, as soon as I get back out to the blind! Probably Saturday...hopefully. I bought them at walmart, if I remember correctly they were around $10 a piece.
O 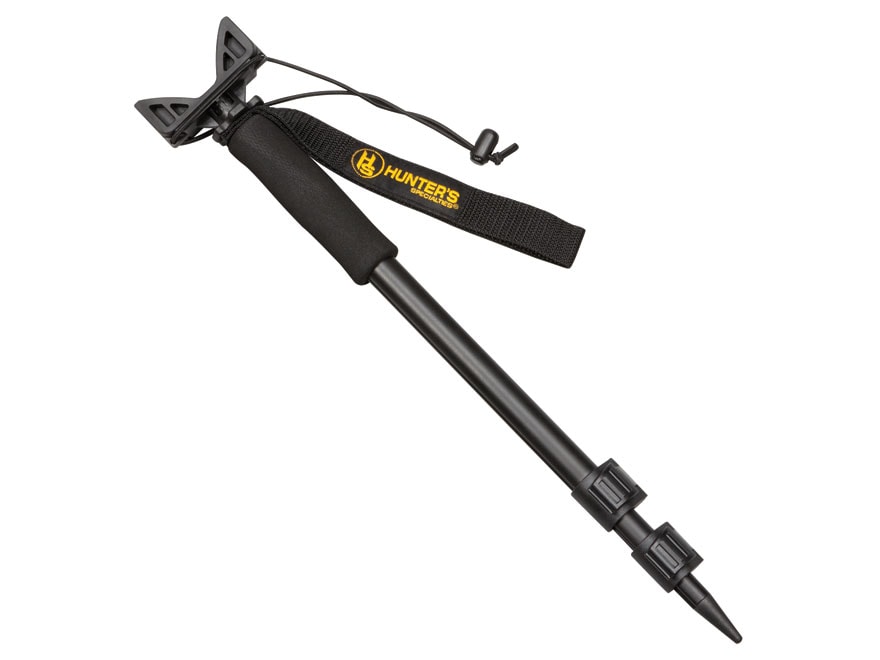 With the Hunter's Specialties Shooter's Stick, you can steady your aim while shooting from seated ground position. Adjustable height from 17-36 inches...

Joined 4 mo ago
·
83 Posts
I use an trekking pole, adjustable and easy. I thot about drilling a hole in the top for my sling swivel to drop into, but have not yet.
1 - 8 of 8 Posts
Join the discussion
Continue with Facebook
Continue with Google
or sign up with email
About this Article
0 likes
7 Replies
Written By: